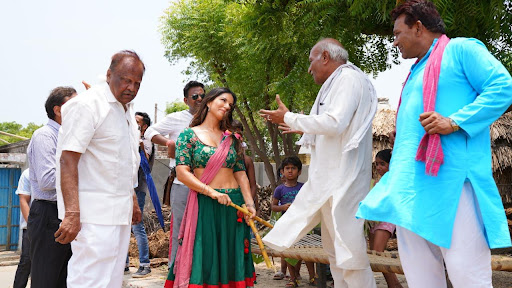 It is Koka Kola not Coca Cola.

Koka Kola is an upcoming Hindi movie. The movie is directed by Prasad Tatikeni and will feature Sunny Leone ,Suneel and Mandana Karimi as lead characters.

Sunny Leone never fails to mesmerize the audience whenever she appears on the screen. The gorgeous diva is currently enjoying working for her forthcoming film ‘Koka Kola’. The actress known for her glamour avatar would be going de-glam and will be seen playing a Desi girl in the film. The film is produced by Mahendra Dhariwal and Paramdeep Sandhu and is directed by Prasad Tatikeni.

Excited about being draped in six-yard, Leone says, “I’m happy to take a break from the western attire that I usually wear in films. I love saris, and it was refreshing to stand in front of the mirror and find myself looking so different. The look has been put together by my stylist Hitendra (Kapopara) who procured saris from different regions of the country.

The comedy-drama which also features Mandana Karimi required Leone to pick up Bhojpuri language. Always up for any new challenge, the actress says, “The audience will see me in a new avatar. I had to learn Bhojpuri for the role.”
The film which went on the floor last month is currently being shot in Noida.
Meanwhile, on the work front, Sunny Leone will be seen in ‘Arjun Patiala’. The movie released on July 26. She also has some projects from the south in her hand including ‘Veeramadevi’ and ‘Helen’.

Continue Reading
You may also like...
Related Topics:sunny leone

Bollywood movies based on caste system