Due to the cheerful and bubbly attitude, the Sri Lankan actress Jacqueline Fernandez is always been everyone’s favorite. She loves to treat her fans by regular updates. Now a days she is regularly uploading performance video from Dabangg Tour Reloaded through Instagram. This amazing tour has happened in the United States. 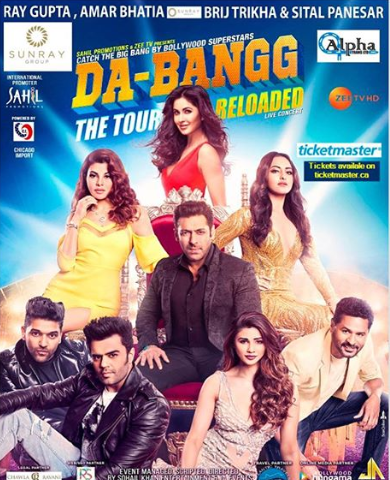 By her performance, she left the audience Spellbound. She was accompanied with Salman Khan, Katrina Kaif ,Sonakshi Sinha, Daisy Shah,Maniesh  Paul, Prabhudheva, Badshah and Guru Randhawa.

But the credit of the video goes to Dieko Mirza. Dieko Mirza is a Dutch filmmaker from Amsterdam. He joined the tour and made all the videos and pictures during the Da-bangg tour.

The overwhelming response in Atlanta motivated the stars at the beginning of the tour.

Just landed in Atlanta and this is the response!!!! So overwhelmed 💗💗💗 can’t wait to see you all the the show tomo!!! #dabangg #worldtour @thejaevents

Atlanta was the dancing city on 22.06.2018 when Salman and Jacqueline performed on Stage.

Don’t forget to check the glimpse of performance in Los Angeles on 24.06.2018 after this crew moved to DALLAS!

Check the fun part of the tour when the beauty was not on stage,Dieko does a great job capturing all the moments for memory and Jacqueline fans.